LAX is one of the busiest airports on VATSIM, both for controllers and pilots. Since it is such a heavily trafficked airport on VATSIM and in the real world, there are many departure and arrival procedures that are used to expedite the flow of traffic. Of these departures, the ORCKA departure, is both very commonly included in flight plans, and prone to some mistakes. By writing this, I hope to clear up some confusion caused by the unique departure procedure and the cluttered plate. 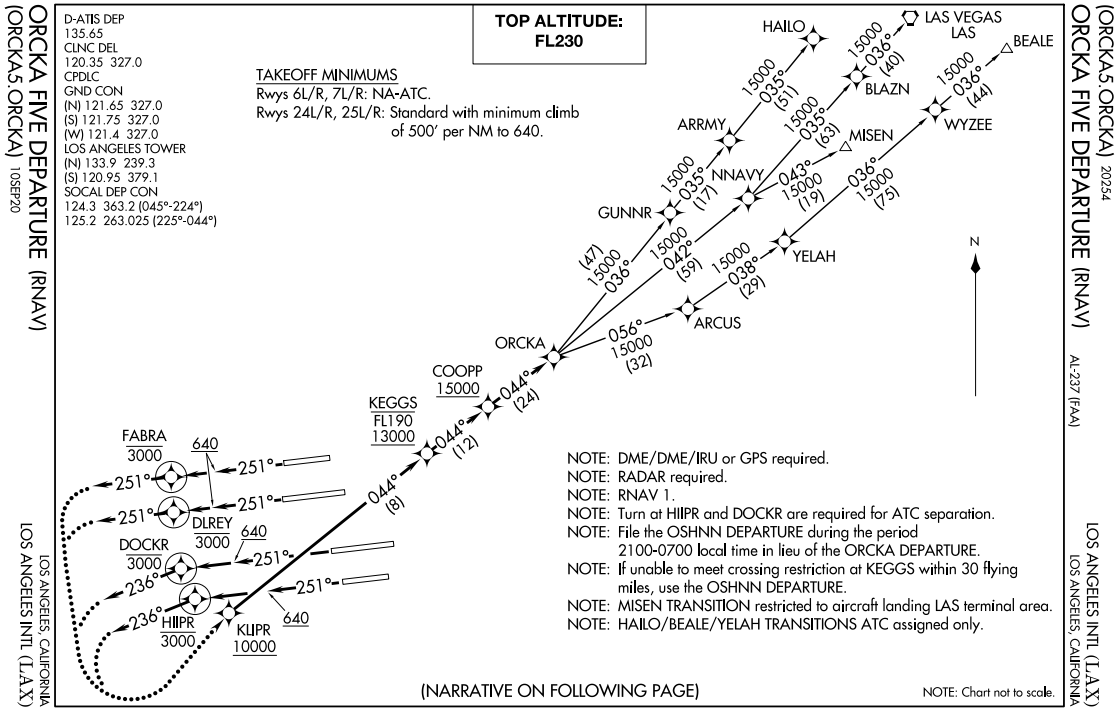 Despite what the lines may appear to show, pilots must not proceed to KLIPR after crossing their runway’s respective RNAV fix.

That last part seems to trip the most pilots up, “then on heading <> or as assigned by ATC.” This means that, if flying by hand, simply fly the heading on the departure until ATC gives you a turn direct to KLIPR, then resume the departure from there (on to KEGGS and so on). It seems far more often pilots let the FMC dictate where they go, which while not an issue generally can cause problems when programmed incorrectly. Specifically, with the deletion of “VECTORS” legs and the removal of discontinuities therein. In order for the FMC to properly fly the departure, it is imperative that the “VECTORS” leg be left intact. Such a leg will keep your airplane flying the correct heading until ATC gives you a turn.

You are N12345, flying from LAX to LAS. Clearance delivery has cleared you on the ORCKA5 departure, MISEN transition, climb via SID except maintain 5000. Loading the departure into the flight plan, you are greeted with this. 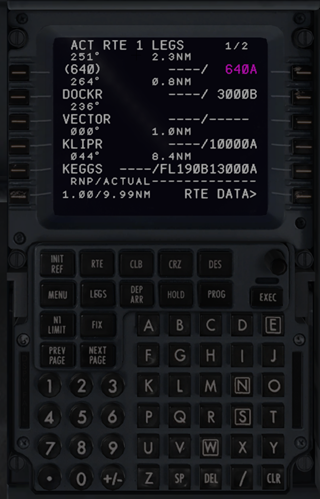 As we can see, there is the 640’ crossing, from which we navigate to DOCKR at or below 3000. After, the “VECTOR” leg mentioned earlier is shown. It is absolutely imperative that pilots do not delete this leg. As shown, the vector leg is on a heading of 236, as published on the departure. The same is true for the north runways, but on a heading of 251.

But what if your FMC does not have this VECTORS leg present? If after ensuring that there hasn’t been a mistake in loading the departure, and that your navdata is up to date and the leg still isn’t present, simply fly using heading. The two ways of doing this (with or without autopilot engaged) is to fly in LNAV mode until DOCKR and then switch to heading mode, or to use heading mode from the start. While the latter option does not legally fly the RNAV departure, it is fairly accurate for sim reasons, as real aircraft would not have this issue when loading the departure.

You start up and taxi out to runway 25R. Tower tells you “N12345 RNAV DOCKR wind calm runway 25R cleared for takeoff.” Throttles go up, airspeed builds, and you takeoff. Per the departure “climb on heading 251 to 640 feet, then climb direct to cross DOCKR at or below 3000.” Up you go, passing through 640’ easily, and onto DOCKR.

Contacting departure, the controller says “N12345 radar contact, altitude as reported, climb via ORCKA5 departure.” Now what? Simple, continue flying the departure. After DOCKR, begin the vectors leg, in this case on heading 236. The “climb via SID” part of the instruction simply means you can ignore the “except maintain 5000” from the initial clearance on the ground. To what altitude? FL230, shown on the bottom right of the Jeppesen chart and top middle of the FAA charts, complying with altitude restrictions. In short order, the controller will issue an instruction for you to rejoin the departure at KLIPR, either with another assigned heading or a vector directly to the fix.

To briefly summarize, the ORCKA departure is frequently flown incorrectly, causing loss of separation issues at LAX. This can be attributed to some misinformation floating around online about deleting VECTORS legs in flight plans, and confusing charting on FAA departure plates. Ensure that the VECTORS leg is present in your FMC when loading the departure into the FMC. If it is not present, simply fly either manually or using the heading mode present in almost all autopilots manufactured in the last 70 years.

I hope this has been informative, and I look forward to seeing you all in the virtual skies!