Many approach students start out on SAN_APP which is a large approach sector, but has some of the more challenging approaches to vector onto in ZLA. If the aircraft will overfly an IAF or feeder fix, you can issue an approach clearance using the phraseology of section 4-8. That’s pretty straight-forward; we’ll look at vectoring to this approach. 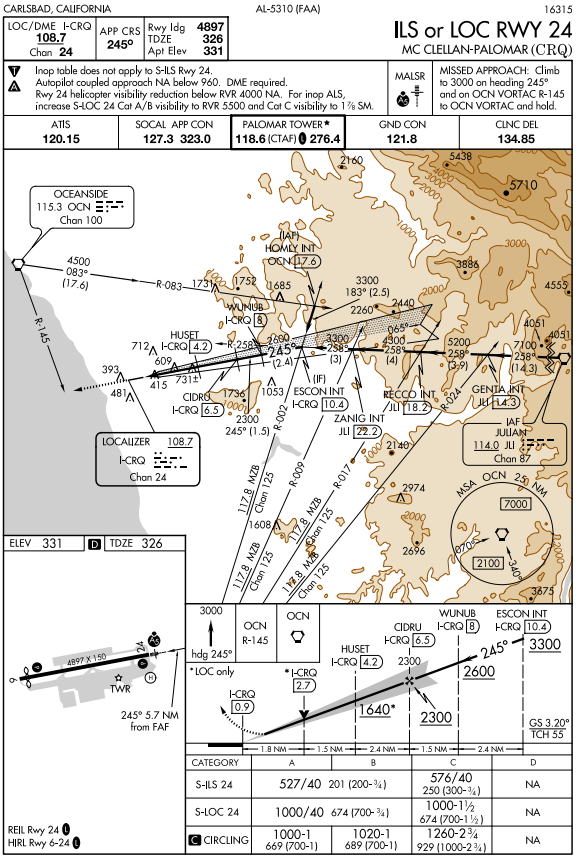 The final approach fix is at CIDRU (again, on an ILS, the FAF is shown using the “lightning bolt” symbol...in this case it’s 2300’ MSL on the glideslope and the glideslope should cross CIDRU at 2300’ MSL). We must vector onto final at least three miles from the FAF; so, vectors should be issued to intercept final at least 3 miles from CIDRU. Three miles from CIDRU on the localizer is on the edge of the 3500’ MVA area. Note that there is no published procedure on the localizer east of ESCON. You could vector a pilot to intercept the JLI 258 radial where there is a published procedure. If you vector a pilot onto the localizer east of ESCON, he’ll need to maintain the minimum vectoring altitude until the published procedure begins.


This approach illustrates another important point that comes up regularly in ZLA. The MVAs east of CRQ rise to 5200’ at about 15 miles and to 7000’ at a little over 20 miles. You can assign a pilot on downwind 3500’, vector to base a little east of ESCON, and clear them for the approach, and have it all be legal. But, you should always consider the MVA a pilot is flying toward. For a slow moving aircraft, the 6 miles between ESCON and the 5200’ MVA area probably gives plenty of margin for error. But, a fast moving jet might cover more than four miles a minute, and have a fairly large turn radius. All it would take is a one minute distraction elsewhere in your sector, and you would likely have an MVA bust if the aircraft was at 3500’. A conservative technique for vectoring to this approach is to assign 5200’ or higher to aircraft on the downwind, and issue a descent to 3500’ once it’s clear that they’ll remain outside the higher MVA areas. There might be times where you want to keep aircraft as high as 7000’ in case they go far enough east to enter the 7000’ MVA area. As you study to work new sectors, always review the MVA map and compare it to the IAPs in the sector.