Aircraft same runway separation (SRS) categories are specified in Appendices A, B, and C of the FAAO 7110.65 and based upon the following definitions:

CATEGORY I - small aircraft weighing 12,500 lbs. or less, with a single propeller driven engine, and all helicopters.

CATEGORY III - all other aircraft.


a. Separate an arriving aircraft from another aircraft using the same runway by ensuring that the arriving aircraft does not cross the landing threshold until one of the following conditions exists or unless authorized in FAAO 7110.65 section 3-10-10, Altitude Restricted Low Approach (discussed later in this topic).


1. The other aircraft has landed and is clear of the runway. 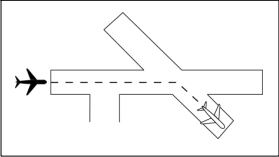 Between sunrise and sunset, if you can determine distances by reference to suitable landmarks and the other aircraft has landed, it needs not be clear of the runway if the following minimum distance from the landing threshold exists: 
2. The other aircraft has departed and crossed the runway end. 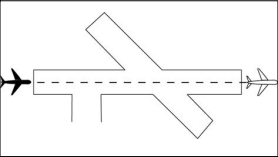 If you can determine distances by reference to suitable landmarks and the other aircraft is airborne, it need not have crossed the runway end if the following minimum distance from the landing threshold exists:

(b) Category II aircraft landing behind Category I or II- 4,500 feet. 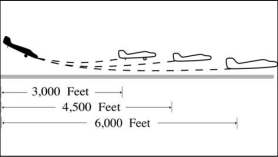 3. When the succeeding aircraft is a helicopter, visual separation may be applied in lieu of using distance minima.


b. Issue wake turbulence advisories, and the position, altitude if known, and the direction of flight of:


1. The heavy jet/B757 to aircraft landing behind a departing/arriving heavy jet/B757 on the same or parallel runways separated by less than 2,500 feet.


2. The large aircraft to a small aircraft landing behind a departing/arriving large aircraft on the same or parallel runways separated by less than 2,500 feet.

Issue traffic information to each aircraft operating on intersecting runways.


1. The preceding aircraft has departed and passed the intersection/flight path or is airborne and turning to avert any conflict. 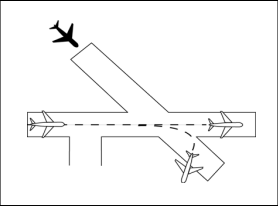 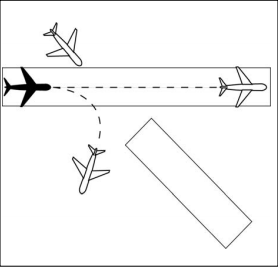 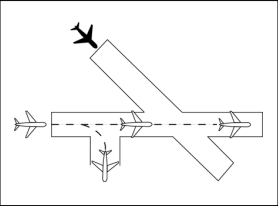 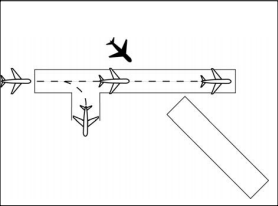 When visual separation is being applied by the tower, appropriate control instructions and traffic advisories must be issued to ensure go around or missed approaches avert any conflict with the flight path of traffic on the other runway.


When LAHSO procedures are in effect, the following conditions apply:

Application of these procedures does not relieve controllers from the responsibility of providing other appropriate separation contained in the FAAO 7110.65.


1. A simultaneous takeoff and landing operation shall only be conducted in VFR conditions.


2. Instruct the landing aircraft to hold short of the intersecting runway being used by the aircraft taking off. In the case of simultaneous landings and no operational benefit is lost, restrict the aircraft of the lesser weight category (if known). LAHSO clearances shall only be issued to aircraft that are listed in the current LAHSO directive, whose Available Landing Distance (ALD) does not exceed the landing distance requirement for the runway condition.

How do you determine a particular aircraft’s required LAHSO distance? Let’s use the Burbank airport (BUR) and Twin Beech 18 (BE18) as an example. First, use the FAAO 7360.1 to lookup the aircraft’s LAHSO group (alternatively, you can use a different source that provides the same info.) The 7360.1 shows that BE18 belongs to the LAHSO group 4.

Now that we know the BE18’s LAHSO group, we need to determine its required LAHSO landing distance. Scroll up to the beginning of the Appendix A, table A-1 “Land and Hold Short Operations (LAHSO) Aircraft Group/Distance Minima.” Note that the required landing distance is also affected by the airport elevation, because at higher altitudes, aircraft will travel greater distances after touchdown before coming to a stop. The airport evelation in our example is 778’ MSL, so we’ll look under the column “Sea Level -999.” This column crosses the Group 4 at the box that reads “4000,” which is the required landing distance for BE18 at our airport’s evelation. 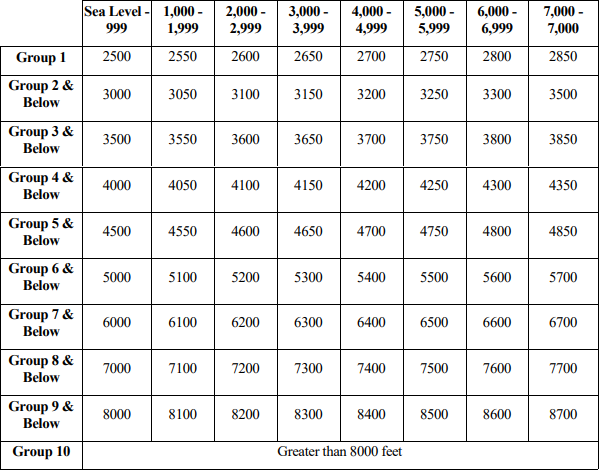 The Airport/Facility Directory shows that the distance available (DIST AVBL) to the LAHSO point of rwy 15 is 4250 feet. The required landing distance of BE18 is 4000 feet, so rwy 15 has enough available distance to authorize a LAHSO for BE18.

Pilots who prefer to use the full length of the runway or a runway different from that specified are expected to advise ATC prior to landing.


3. Issue traffic information to both aircraft involved and obtain an acknowledgment from each. Request a read back of hold short instructions when they are not received from the pilot of the restricted aircraft.

When pilot of restricted aircraft responds with only acknowledgment:

“Runway one four left cleared to land, traffic, (type aircraft) landing runway one eight will hold short of the intersection.”


4. Issue the measured distance from the landing threshold to the hold short point rounded “down” to the nearest 50-foot increment if requested by either aircraft. On VATSIM, you may use a ruler and the airport diagram to calculate the exact distances to LAHSO points.


5. The conditions in subparas b2, 3, and 4 shall be met in sufficient time for the pilots to take other action, if desired, and no later than the time landing clearance is issued.


6. Land and Hold Short runways must be free of any contamination, with no reports that braking action is less than good.


7. There is no tailwind for the landing aircraft restricted to hold short of the intersection. The wind may be described as “calm” when appropriate.


8. You calculate that the aircraft required landing distances are appropriate for the available LAHSO runway length.


9. You may issue LAHSO to a Short-Takeoff-and-Landing (STOL) aircraft if the pilot confirms that it is a STOL aircraft.

a. Separate IFR/VFR aircraft landing behind a departing heavy jet/B757 on a crossing runway if the arrival will fly through the airborne path of the departure- 2 minutes or the appropriate radar separation minima. 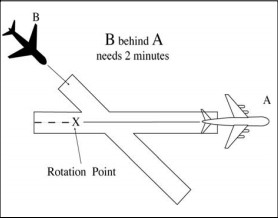 b. Issue wake turbulence cautionary advisories, the position, altitude if known, and direction of flight of the super/heavy/B757 to: 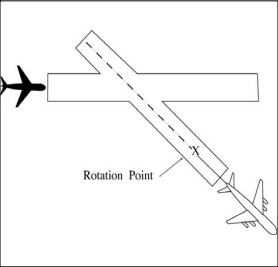