Generally, class C is the airspace from the surface to 4,000 feet above the airport elevation (charted in MSL) surrounding those airports that have an operational control tower, are serviced by a radar approach control, and that have a certain number of IFR operations or passenger enplanements. Although the configuration of each Class C airspace area is individually tailored, the airspace usually consists of a 5 NM radius core surface area that extends from the surface up to 4,000 feet above the airport elevation, and a 10 NM radius shelf area that extends no lower than 1,200 feet up to 4,000 feet above the airport elevation. The part of the class C airspace delegated to tower usually includes the inner 5NM ring, from surface to class C ceiling. The outer shelves are delegated to the radar approach control.

On sectional charts, class C airspace is designated by solid magenta lines and groups of numbers representing the vertical dimensions in hundreds of feet MSL. In this example, the Santa Ana Class C inner ring delegated to the surface area is clearly visible in the center, accompanied by vertical limitations: SFC (surface) to 4,400. 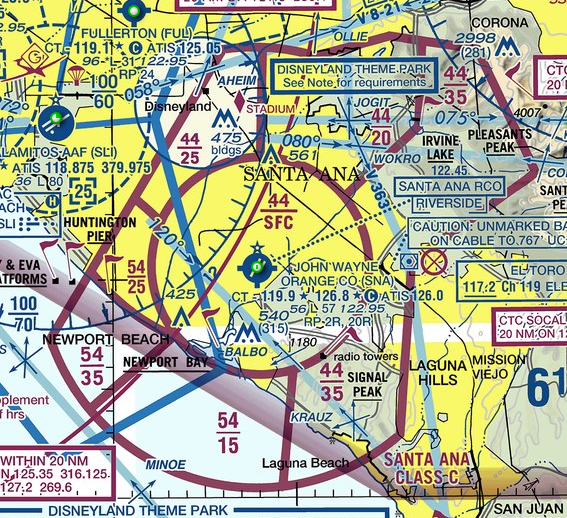 Controllers can display the class C maps on their VRC screen by selecting the “^Class C” entry from the VRC “Diagrams” window. Enabling “Static Text” from the “View” menu will display the vertical dimensions.

a. Class C services include the following:

1. Sequencing of all aircraft to the primary airport.

b. Provide Class C services to all aircraft operating within Class C airspace.

c. Provide Class C services to all participating aircraft in the outer area.

d. Aircraft should not normally be held. However, if holding is necessary, inform the pilot of the expected length of delay.


Note that if the controller responds to the initial radio call without using the aircraft callsign, radio communications have not been established and the pilot may not enter the Class D airspace. For example: “Aircraft calling Santa Ana tower, standby.”


Since departing aircraft will continue to be provided separation outside tower’s airspace (to the extent of the class C outer shelves), pilots should be issued departure frequency and squawk by clearance delivery, so as to accommodate their radar identification by the radar approach control. Departing aircraft should be handed off to the departure controller wheels up or as soon as practical after takeoff.

b. When necessary to assign an altitude for separation purposes to VFR aircraft contrary to standard VFR cruising altitudes, advise the aircraft to resume altitudes appropriate for the direction of flight when the altitude assignment is no longer needed for separation or when leaving the class C.

a. VFR helicopters need not be separated from IFR helicopters. Traffic information and safety alerts must be issued as appropriate.

b. Hot air balloons need not be separated from IFR aircraft. Traffic information and safety alerts shall be issued as appropriate.