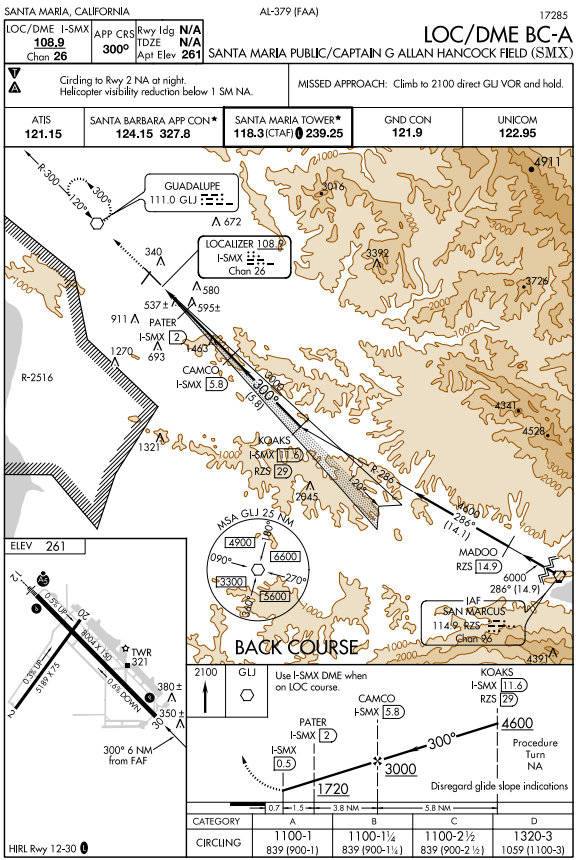 This is an example of an approach which has only circling minimums published, but is perfectly aligned with runway 30. The reason for the circling only minimums in this case is that the descent gradient is too steep (if you are interested in numbers, this is defined as exceeding 400’ per NM...this case works out to approximately 450’/NM) between the final approach fix and the runway to allow for straight-in minimums. The pilot may still choose to land straight-in on 30, but must comply with the published circling minimums until he sees the airport. This approach only has one IAF, which is RZS, and there are no feeder fixes. If a pilot approaches from the SW-NE, you’ll probably end up vectoring him to final. There’s nothing too complicated in this case though. The MVA is 3000 in the area of KOAKS. The MVA does rise to 4500’ pretty quickly NE of the final approach course, but as long as the pilot intercepts at or outside KOAKS, 4500’ would be acceptable. The usual rules apply, you must vector to intercept at an angle of no more than 30 degrees, at an altitude that will allow the pilot to descend in accordance with the published procedure (and, obviously, at/above the MVA). The approach title can be a mouthful: