Tower controllers must be familiar with the dimensions of their airspace and the airspace of the adjacent class B, C and D airports, and coordinate its use. Coordination is required when an aircraft under your control will penetrate an adjacent controller’s airspace. The possible means of coordination may include obtaining a pointout or arranging a transfer of control to the adjacent facility.

Generally, class D is the airspace from the surface to 2,500 feet above the airport elevation (charted in MSL) surrounding those airports that have an operational control tower. The configuration of each Class D airspace area is individually tailored and when instrument procedures are published, the airspace will normally be designed to contain the procedures.


You can find the exact surface area dimensions for each class D airport on Sectional and Terminal Area Charts available online at www.skyvector.com On sectional charts, Class D surface area is designated by a dashed blue lines surrounding the airport, and a number blue brackets representing the surface area ceiling. A minus ceiling value indicates surface up to but not including that value.


In this example is San Luis (SBP) class D. A blue dashed circle representing the lateral limits of class D surrounds the airport, and the number 27 in brackets shows that the airspace ceiling is 2700’ MSL. 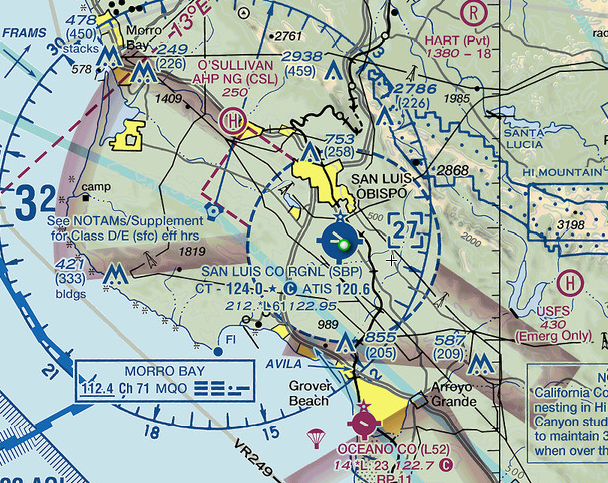 
Note that if the controller responds to the initial radio call without using the aircraft callsign, radio communications have not been established and the pilot may not enter the Class D airspace. For example: “Aircraft calling Santa Monica tower, standby.”