Generally, Class B is the airspace from the surface to 10,000 feet MSL surrounding the nation’s busiest airports in terms of IFR operations or passenger emplacements. The configuration of each Class B airspace area is individually tailored and consists of a surface area and two or more layers (some Class B airspace areas resemble upside-down wedding cakes), and is designed to contain all published instrument procedures once an aircraft enters the airspace. In ZLA, SAN and LAS class B cover not one but two primary airports each. An ATC clearance is required for all aircraft to operate in the area, and all aircraft that are so cleared receive separation services within the airspace. The part of the Bravo airspace delegated to tower is generally 5NM around the center of the airport, from surface to 3,000ft AGL. The exact dimensions of class B surface area delegated to tower can be found in the vZLA tower SOPs. The various shelves of class B, as well as the part of it immediately above the tower’s ceiling is delegated to the radar approach control.

On sectional charts, class B airspace is designated by solid blue lines and groups of numbers representing the vertical dimentions of hundres of feet MSL. In this example is a part of Los Angeles Bravo airspace. Note, sectional charts provide general view of class B airspace, but there’s no reference to which part of it belongs to tower. 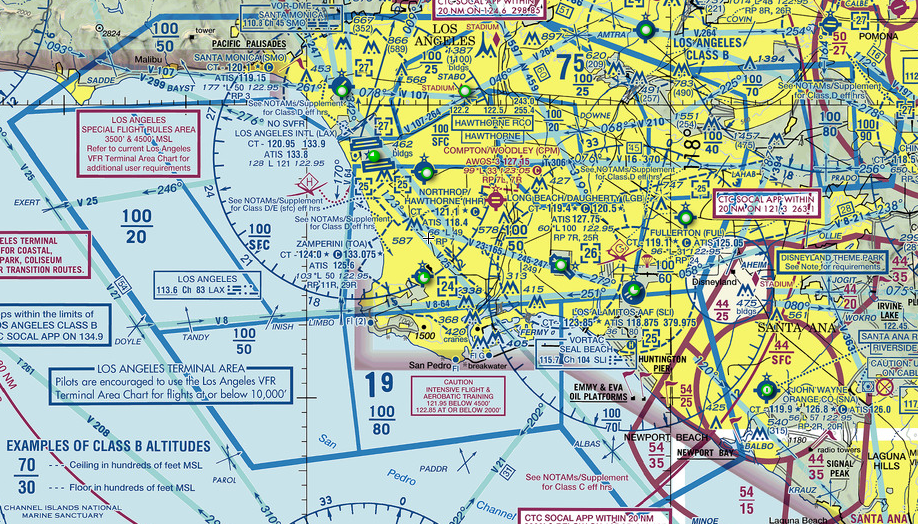 Controllers can display the class B maps on their VRC screen by selecting the “^Class B” entry from the VRC “Diagrams” window. Enabling “Static Text” from the “View” menu will display the general vertical dimensions.’‘

Apply Class B services and procedures within the designated Class B airspace.

2. VFR Aircraft in Class B Airspace

VIA (route). MAINTAIN (altitude) WHILE IN BRAVO AIRSPACE.

or when a pilot initiates a specific request himself

REMAIN OUTSIDE BRAVO AIRSPACE. (When necessary, reason and/or additional instructions.)

Assignment of radar headings, routes, or altitudes is based on the provision that a pilot operating in accordance with VFR is expected to advise ATC if compliance will cause violation of any part of the CFR, such as clearance from clouds criteria.

b. Approve/deny requests from VFR aircraft to operate in Class B airspace based on workload, operational limitations and traffic conditions.

c. Inform the pilot when to expect further clearance when VFR aircraft are held either inside or outside Class B airspace.

d. Inform VFR aircraft when leaving Class B airspace. This prompts the pilot that he’s no longer being provided class B separation services.

a. Clear large turbine engine-powered airplanes to/from the primary airport using altitudes and routes that avoid VFR corridors and airspace below the Class B airspace floor where VFR aircraft are operating. VFR aircraft routed in such a way will have to fly through the parts of class B delegated to radar approach control. For this reason, any large turbine engine-powered aircraft should be issued departure frequency and squawk by clearance delivery, so as to accommodate their radar identification by the radar approach control. Departing aircraft should be handed off to the departure controller as soon as practical after takeoff.

Pilots operating in accordance with VFR are expected to advise ATC if compliance with assigned altitudes, headings, or routes will cause violation of any part of the CFR.

b. VFR aircraft shall be separated from VFR/IFR aircraft that weigh more than 19,000 pounds and turbojets by no less than:

c. VFR aircraft shall be separated from all VFR/IFR aircraft which weigh 19,000 pounds or less by a minimum of:

Provide mandatory traffic advisories and safety alerts, between all aircraft.

VFR helicopters need not be separated from VFR or IFR helicopters. Traffic advisories and safety alerts shall be issued as appropriate.

b. Aircraft assigned altitudes which are contrary to contrary to standard VFR cruising altitudes must be advised to resume altitudes appropriate for the direction of flight when the altitude assignment is no longer required or when leaving Class B airspace.

On VATSIM, approach control will handoff arriving aircraft to tower in clear sequence. If the local controller wants a more specific spacing, the tower shall specify the approach interval.