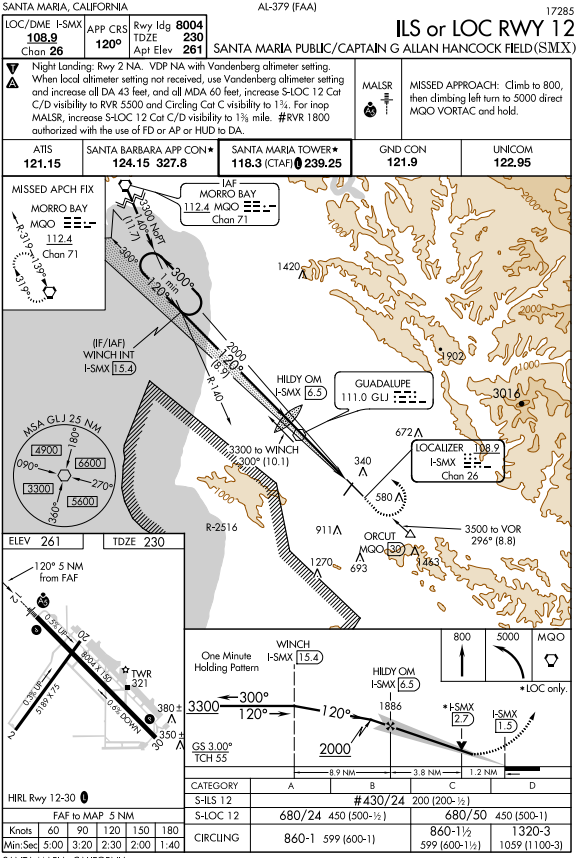 This approach clearly illustrates a point that comes up from time-to-time. The area along the localizer course has a relatively high MVA of 3000’. We have to vector 3 or more miles outside of the FAF, but also at or below the glideslope. The glideslope crosses HILDY at roughly 2000’ MSL. But we have to vector onto final no lower than 3000’ due to the MVA. So how far from HILDY will the glideslope be 3000’? This is a great chance to use our 300’ per mile rule. 3000’ MSL is 1000’ above the glideslope altitude of 2000’ at HILDY. Using 300’ per mile, we must vector to intercept at least 3.3 miles from HILDY. So, to use round numbers, the pilot should intercept four miles from HILDY. The phraseology here is the same:


Once the pilot establishes himself on the published procedure, he may descend to 2000’ at his discretion.


You could also clear an aircraft for the approach from any IAF using the phraseology in section 4-8. This approach also uses what’s known as a “feeder fix.” ORCUT is not labeled as an IAF, but provides a route to GLJ VOR which is an IAF. If a pilot was routed over ORCUT intersection via V27, he could be cleared for the approach using:


In either case the pilot would fly inbound from ORCUT on the GLJ 116 radial, then outbound on the GLJ 320 radial until commencing the teardrop turn to join the localizer. He has minimum altitudes published throughout the approach, so he can descend at his discretion.


Also, note that the phraseology for this approach clearance could be “cleared approach” (although this would permit the pilot to fly any other instrument approach at SMX also), “cleared I-L-S approach” (since there’s only one ILS at SMX), or “cleared I-L-S runway one two approach.” Any of those is equally correct.