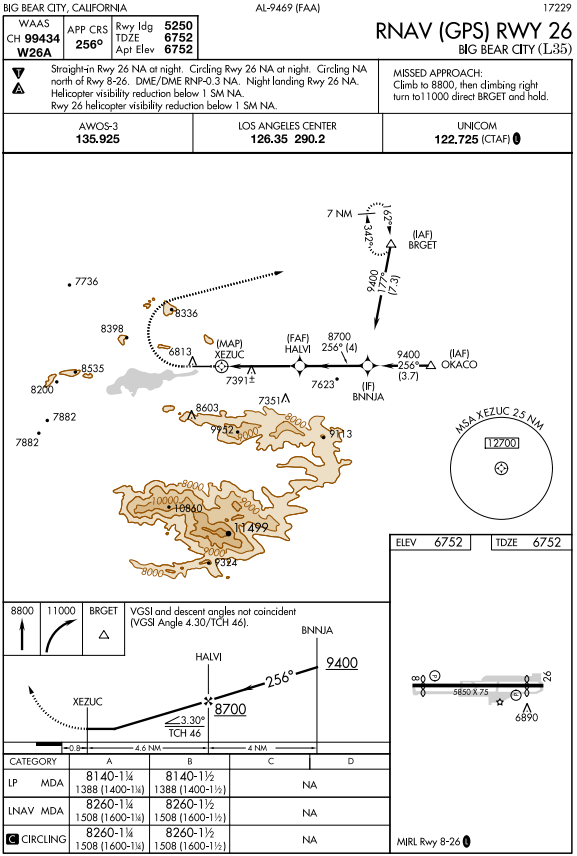 At first glance, this approach looks relatively simple, and it is. It’s a good approach to illustrate one of the requirements for RNAV approach clearances. In section 4-8, the .65 adds one additional requirement that is unique to RNAV approaches. It’s 4-8-1-b-3 which requires that aircraft be “Established on a heading or course that will intercept the initial segment at the initial approach fix...for a GPS or RNAV instrument approach procedure at an angle not greater than 90 degrees. Angles greater than 90 degrees may be used when a hold in lieu of procedure turn pattern is depicted at the fix for the instrument approach procedure.” Since there’s no hold depicted at OKACO that’s part of the approach procedure (the hold that is depicted is part of the missed approach, not a hold in lieu of a procedure turn), the pilot must approach OKACO on a course of 166 clockwise through 346. If an aircraft were routed via V386 from PMD to OKACO, that would set the pilot up for an intercept angle greater than 90 degrees. In that case, even though the pilot will overfly an IAF, he’d have to be routed out to the east somehow to set up an acceptable intercept angle. Once the intercept angle was acceptable, the approach clearance phraseology is the same as we’re used to:


“N123SX, cross OKACO at or above one one thousand, cleared approach.”


Remember that distance is not required in the approach clearance if the approach will begin at an IAF. You could also radar vector to final for this approach. The MVA along most of the approach course is 10,000. The minimum altitude at HALVI is 9100’. Using our 300’ per mile rule, we’d need to intercept at least 3 miles from HALVI, which conveniently is exactly how far we must always intercept final from a radar vector anyway. So, the phraseology could be:


Just like the LOC 27 example, you might want to break this approach clearance up into two parts:


Once he reports established or is observed to be established on a published segment of the final approach course:


However, if the pilot intercepted final outside of OKACO, then he would not be on a published segment of the approach and would need altitude information in some form with his clearance; some possibilities are (these transmissions all assume that the pilot has been issued the first instruction above with a heading and instructions to intercept final):


“N123SX, 4 miles from OKACO, maintain one zero thousand until established on a published segment of the approach, cleared approach.”


Remember, since L35 does not have a control tower, even though runway 26 is named in the title of the approach procedure, the pilot could circle to land on runway 8 without notifying you ahead of time.