LAS_APP students will see this approach regularly. It is interesting for a few reasons. First, it has no IAF; this means that the controller must vector to final (which is the reason that radar is required for the procedure). Second, there is a narrow corridor for vectoring and allowing the aircraft to descend to an altitude on/below the glideslope. Finally, the final approach fix is almost 9 miles from the runway, which creates some unusual options discussed below. 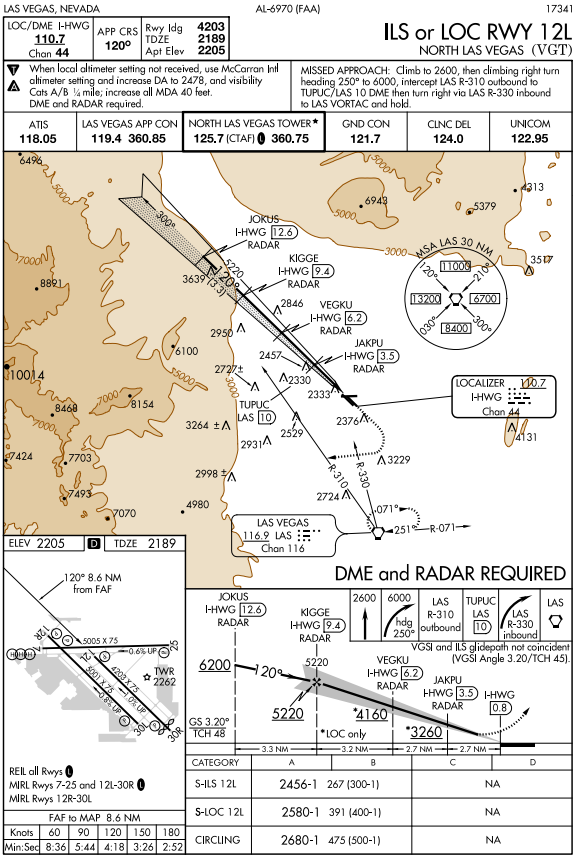 Most arrivals will approach VGT from the south and east, due to the terrain and military airspace to the north and west. These aircraft will need to be vectored onto a downwind. A downwind southwest of the final approach course is not practical, since the MVA just slightly southwest of final is 8000’ initially and quickly rises to 12,900’. That means we need to vector to a downwind on the northeast side of final. There is limited space for vectoring there; the MVAs just 5 miles offset from the final approach course are as high as 10,900’. Obviously, aircraft being vectored to this approach need close attention from the controller.


Often, controllers won’t be able to give aircraft continuous attention. In those cases, as we’ve discussed previously, you need to be aware of the MVAs the aircraft are aimed toward. You can give an aircraft over LAS a descent to 6000’, vector them to final, and not have an MVA bust; but, you have a very small margin for error. A better technique would be to keep the aircraft above the MVA they are flying toward and step them down when you are sure they will be clear of the higher MVA areas.


For example, let’s take an aircraft that arrives on the CLARR arrival and is handed to you at 13,000’. If they continue to navigate via the STAR, you’ll want to consider vectoring them for the approach sometime after the turn at ISSAR intersection. Since the MVA rises above 8000’ north of VGT, a good technique is to keep them at 9000’ to provide buffer space in case you get busy with other aircraft. To reduce the risk of an MVA bust, don’t issue further descent clearance until the aircraft is established on the downwind heading and you are sure that its track will remain clear of the higher MVAs. JOKUS is a little more than 3 miles from the FAF, so it works well for depicting the approach gate. The charted altitude there is 6200’, so as long as aircraft cross it at or below that altitude, they won’t be above the glideslope.


An even more conservative approach to altitude planning is to keep aircraft at 11,000’ until they are established on the downwind, keeping them above the 10,900’ MVA northeast of JOKUS. In that case, you have the flexibility to assign any heading to get aircraft to the final approach course. As mentioned at the beginning, this approach has a very long final segment. The approach gate is about 12 miles from the runway, which means that an aircraft vectored over the top of the airport will have at least a 12 mile downwind to descend, plus the turn to base and final. If the aircraft turns downwind at 11,000’ and is then issued a descent, they will still have at least 15 miles to be at or below 6200’ which is the charted altitude at JOKUS.


The turn to base and final requires the closest attention. An overshoot of just a mile can result in an MVA bust. Remember that the principle factor determining turn radius is airspeed (regardless of aircraft size); consider assigning speed reductions prior to the base turn, so that the aircraft will have a better turn rate. Also, consider vectoring to a slightly longer final, to allow the turn to intercept to be issued sooner and still have the aircraft established on the localizer by JOKUS (the approach gate). The phraseology is getting familiar by now: