Once a departure release has been granted, it is valid for 3 minutes. In the event the aircraft fails to takeoff within this time, its takeoff clearance must be cancelled and the departure controller should be notified of this. A new release is required before tower can clear the same aircraft for takeoff again.

a. All coordination between the local and departure controller must be performed via private chat or over voice (landline, Teamspeak, etc.)


The standard form for requesting a VFR release is to start the message with the words “VFR release,” followed by the aircraft callsign, aircraft type, its direction of flight, and departure runway. If a VFR aircraft is to be provided separation services, the departure controller will specify the departure heading/pattern leg in the release.

b. At all Class B and C airports in vZLA, IFR departures are coordinated utilizing rolling/boundary notifications. “Rolling/boundary” means that the aircraft must be already “rolling” or at the airport “boundary” by the time departure control is notified of it. For the purposes of vZLA, the notification should be done immediately after takeoff clearance has been issued.


No acknowledgment by Departure Control is necessary, since the aircraft is already rolling.


Since there’s no “release” element, the initial departure separation is the responsibility of the local controller. Local controllers at these locations must utilize the following separation minima:

(a) Successive departing IFR aircraft that will fly the same or converging courses after departure should be provided the standard terminal radar separation: the minimum of 3 miles.

1. Controllers should take different aircraft performance characteristics into account when determining initial separation, and increase spacing when required (e.g. if the trailing aircraft is faster than the preceding one, spacing needs to be increased to avoid catching up.)

2. For aircraft participating in wake turbulence separation, apply the provisions of the previous section of the STM.

(b) If the departures’ courses diverge immediately after takeoff, this separation may be reduced as specified in the next section “Successive or Simultaneous Departures on Diverging Courses.”

At airport where radar coverage exists and departure radar identification is established within 1 mile of the takeoff runway, controllers may use departure courses divergence as a way of departure separation before the standard radar separation is achieved. This means that instead of trying to space all of your departures at the minimum terminal separation of 3 to 5 miles apart, lesser minima may be used, provided that the aircrafts’ departure courses diverge. This does not, however, include successive departures participating in wake turbulence separation, in which case the standard wake turbulence in-trail spacing should be used as outlined in the previous STM section.

On VATSIM, all airports have complete radar coverage, so all departures can be considered “radar” at any VATSIM location.

1. Separate aircraft departing from the same airport or adjacent airports in accordance with the following minima provided courses will diverge by 15 degrees or more.

1. FAAO 8260.19, Flight Procedures and Airspace, establishes guidelines for IFR departure turning procedures which assumes a climb to 400 feet above the airport elevation before a turn is commenced. FAAO 8260.3, United States Standard for Terminal Instrument Procedures (TERPS), the ILS missed approach criteria, requires a straight climb of 400 feet be specified where turns greater than 15 degrees are required.

3. When one or both of the departure surfaces is a helipad, use the takeoff course of the helicopter as a reference, comparable to the centerline of a runway and the helipad center as the threshold. 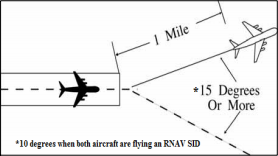 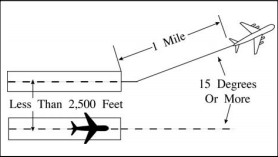 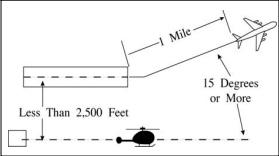 This procedure does not apply when wake turbulence separation is required

b. Between aircraft departing from diverging runways: 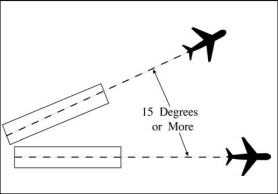 2.) Intersecting runways and/or helicopter takeoff courses which diverge by 15 degrees or more. Authorize takeoff of a succeeding aircraft when the preceding aircraft has passed the point of runway and/or takeoff course intersection. When applicable, apply the procedure in the FAAO 7110.65 para 3-9-5, Anticipating Separation. This procedure does not apply when wake turbulence separation is required. c. Between aircraft departing in the same direction from parallel runways/helicopter takeoff courses. Authorize simultaneous takeoffs if the centerlines/takeoff courses are separated by at least 2,500 feet and courses diverge by 15 degrees or more immediately after departure or 10 degrees or more when both aircraft are flying an RNAV SID. At LAX, most standard departure procedures will establish the north-complex departures on heading 250, and the south-complex departures on heading 235 or further south, so the aircraft on those DPs will automatically participate in this separation method. 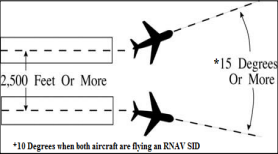 Except as provided in the following subpara “Departures and Arrivals on Parallel or Nonintersecting Diverging Runways,” separate a departing aircraft from an arriving aircraft on final approach by a minimum of 2 miles if separation will increase to a minimum of 3 miles within 1 minute after takeoff.

4. Departures and Arrivals on Parallel or Nonintersecting Diverging Runways

Authorize simultaneous operations between an aircraft departing on a runway and an aircraft on final approach to another parallel or nonintersecting diverging runway if the departure course diverges immediately by at least 30 degrees from the missed approach course until separation is applied and provided one of the following conditions are met:

When one or both of the takeoff/landing surfaces is a helipad, consider the helicopter takeoff course as the runway centerline and the helipad center as the threshold.

a. When parallel runway thresholds are even, the runway centerlines are at least 2,500 feet apart. b. When parallel runway thresholds are staggered and: 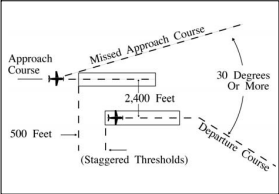 In the event of a missed approach by a heavy jet/B757, apply the procedures in the FAAO 7110.65 para 3-9-6, Same Runway Separation, or para 3-9-8, Intersecting Runway Separation, ensure that the heavy jet does not overtake or cross in front of an aircraft departing from the adjacent parallel runway.


2. The arriving aircraft is approaching the farther runway: the runway centerlines separation exceeds 2,500 feet by at least 100 feet for each 500 feet the landing thresholds are staggered. c. When nonintersecting runways diverge by 15 degrees or more and runway edges do not touch. d. When the aircraft on takeoff is a helicopter, hold the helicopter until visual separation is possible or apply the separation criteria in subparas a, b, or c.

When LAX noise abatement ops are in progress, controllers use diverging headings to establish separation between departures from runway 25R and arrivals to runway 6R.


In this configuration, all departures must be instructed to turn left heading 210 at the shoreline unless otherwise coordinated. Tower must ensure that aircraft are observed starting the turn before transferring communications to departure.